Pho Tay Ho is a dream come true for Mai, who immigrated to the United States in the 1980s as a Vietnam War refugee. Her restaurant originally opened in 1995 and was located on the first floor of an apartment complex in Salt Lake City. 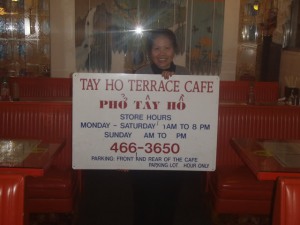 Mai wanted to create a menu that was very simple, but focused. The main entree was Pho, a dish unique to the Vietnamese culture, consisting of rice noodles, vegetables, and different cuts of beef. She chose to specialize on this dish for three reasons: it was healthy, it was delicious, and it could be reasonably priced for customers. This was her way to share something near and dear to her heart with the community.

Life took a turn when the apartment complex ended their rental agreement with Mai in 2008 and left her without a place to sell her food. For a year, Pho Tay Ho was out of business and its future was uncertain.

A year later, Pho Tay Ho returned as a literal “noodle house” after Mai had an unusual idea to flip a house into her new restaurant. Since then, her customer volume has grown exponentially and Mai said, with a chuckle, the best part about this is, “No one will ever be able to kick me out of my restaurant again!”

Since then, her business has been featured on the front page of the Salt Lake Tribune and ABC4’s Daily Dish, won awards for Best Pho and Best Broth from City Weekly, and even received an offer to be featured on the Food Network’s show, Eden Eats.

The new area is cleaner, newer, and more cozy. All of the items on the menu are prepared and made by Mai and her daughter, Michelle. Although the menu is small, the varied combinations of Pho are endless…making Pho Tay Ho a true “noodle house.”